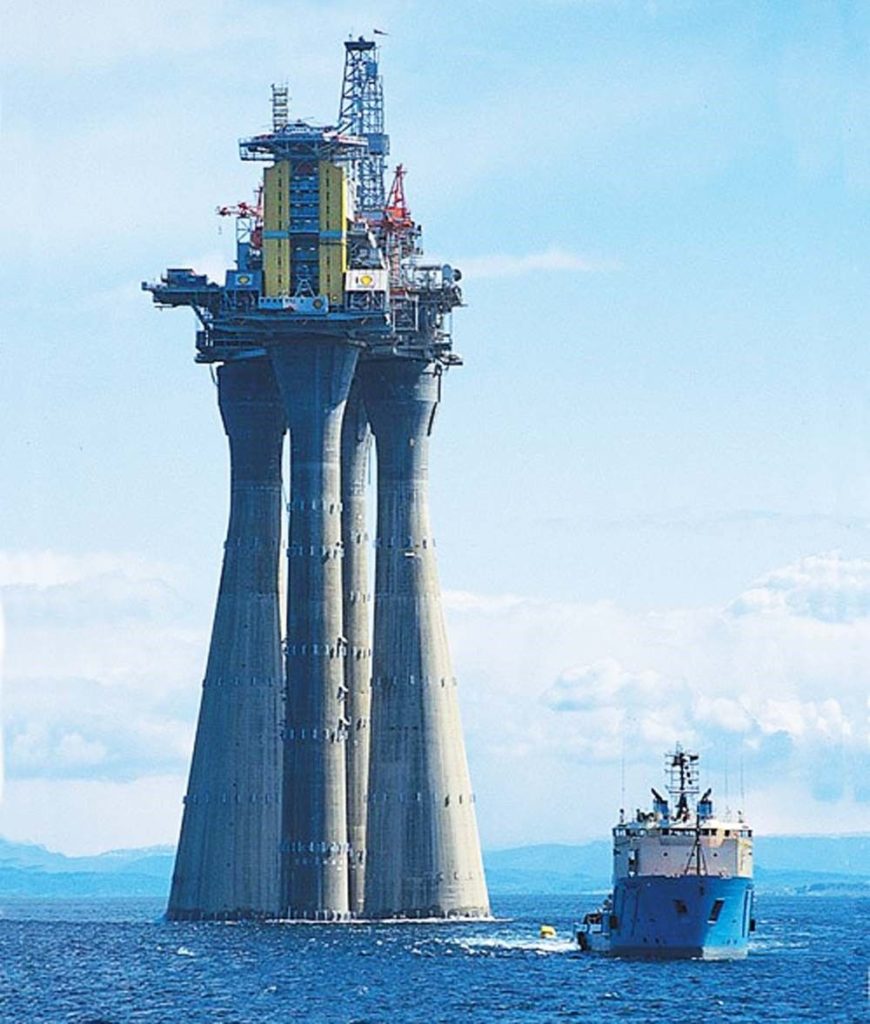 Troll A Platform
a Concrete Tower

One of the Biggest Floating Structures in the World

The Troll A platform is a condeep offshore natural gas platform in the Troll gas field off the west coast of Norway. It is the tallest and heaviest structure that has ever been moved to another position, relative to the surface of the Earth, and is among the largest and most complex engineering projects in history.
The platform was a televised sensation when it was towed into the North Sea in 1996, where it is now operated by Equinor.
The Troll A platform has an overall height of 472 metres , weighs 683,600 tons (1.2 million tons with ballast)and has the distinction of being the tallest and heaviest structure ever moved by mankind. The platform stands on the sea floor 303 metres below the surface of the sea and one of the continuous-slip-formed concrete cylindrical legs (the leg containing the import and export risers) has an elevator that takes over nine minutes to travel from the platform above the waves to the sea floor.

The walls of Troll A’s legs are over 1 metre thick made of steel reinforced concrete formed in one continuous pour (slip forming)and each is a mathematically joined composite of several conical cylinders that flares out smoothly to greater diameters at both the top and bottom, so each support is somewhat wasp-waisted viewed in profile and circular in any cross-section. The concrete legs must be able to withstand intense pressure so are built using a continuous flow of concrete, a lengthy process that takes 20 minutes per 5 cm laid.

In the Autumn of 2010 the Troll A platform was expanded with a new module. This module contains living quarters and a new control room. The new control room and expanded facilities are needed to support the new compressors (a 3rd and 4th are planned and being installed in 2014). These compressors are needed due to the dropping reservoir pressure in the wells.
Troll A Platform was built by Norwegian Contractors for Norske Shell, with base construction beginning in July 1991 at a cost of 4150 million NOK,or approximately US$650 million at the time.

Gas rises from 40 wells, and is exported through a number of pipes, to a processing plant at Kollsnes.

Troll A is scheduled to receive two additional gas compressors to increase production volume and compensate for dropping reservoir pressure in the wells.

The base and the deck of Troll A Platform were built separately, and were joined in 1995 while the base was partially submerged. The base is a Condeep gravity base structure built from reinforced concrete.

The Troll platform was towed over 200 kilometres (120 mi) from Vats, in the northern part of Rogaland, to the Troll field, 80 kilometres north-west of Bergen. The tow took seven days.

Contemporarily, the Troll A is not the biggest offshore platform. It has been reported that the Petronius, owned by Texaco, is at present the world’s largest offshore gas platform.

But while today, the structure has lost its title of being the biggest oil rig, its structuring is worth marvelling about. The Troll A still stands tall – not just for its singularity in standing so tall in the water but also for the vision that its developers projected. Officially, while it may have become second-best, yet for its creators and users, the platform would always remain the first-best.

In 1996, the platform set the Guinness World Record for ‘largest offshore gas platform’.

In 2006, the 10th anniversary of Statoil’s operator-ship of Troll gas production was celebrated with a concert by Katie Melua held at the base of one of the hollow legs of the platform.

As well as entertaining the workers on the rig, the concert set a new world record for the deepest underwater concert at 303 metres below sea level. 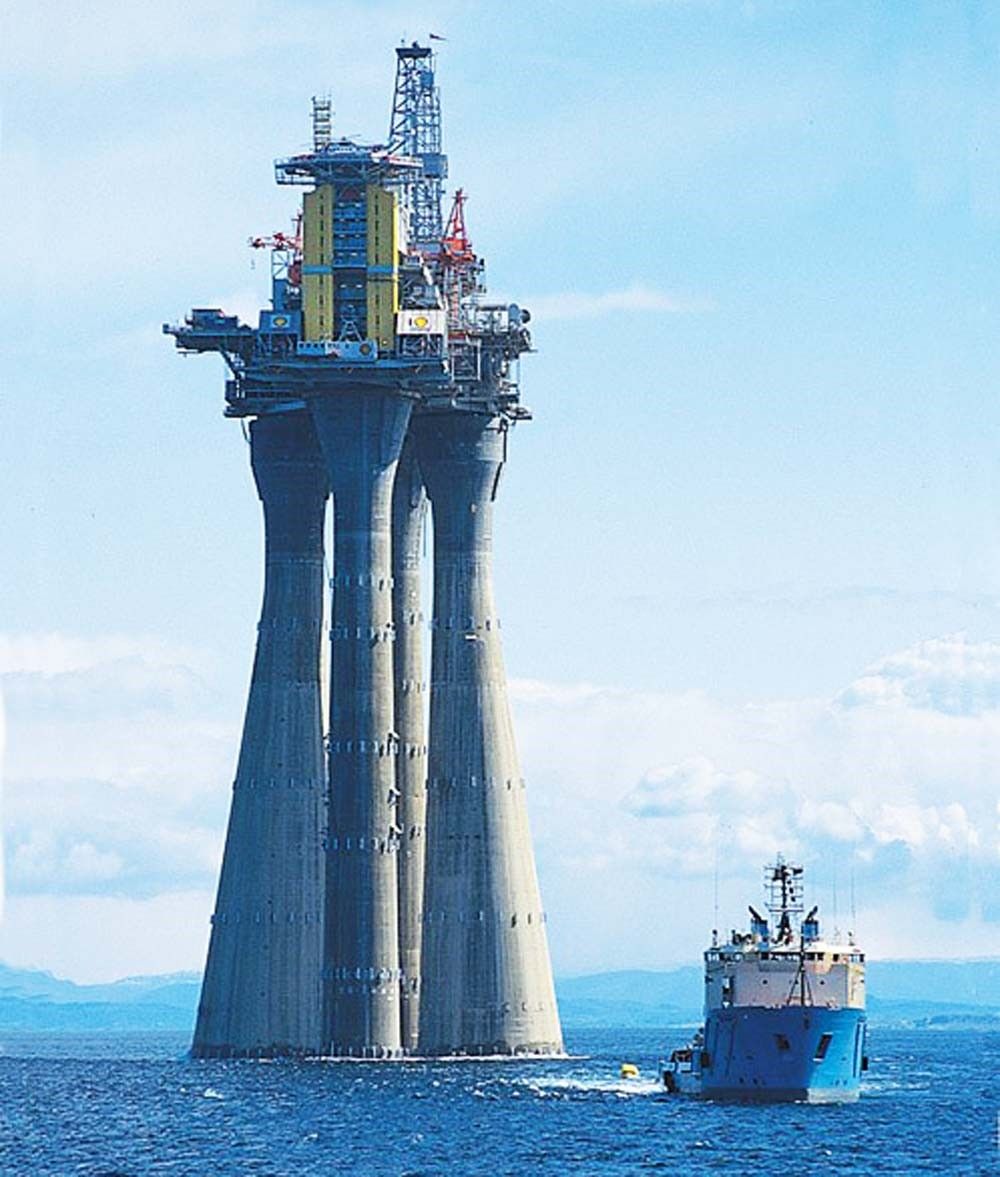 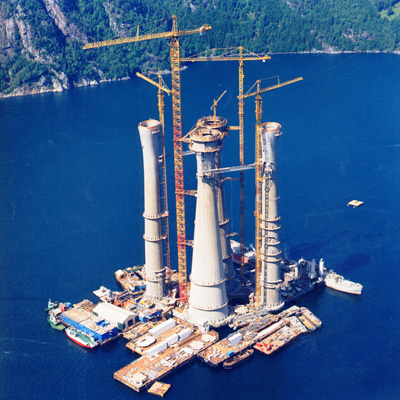 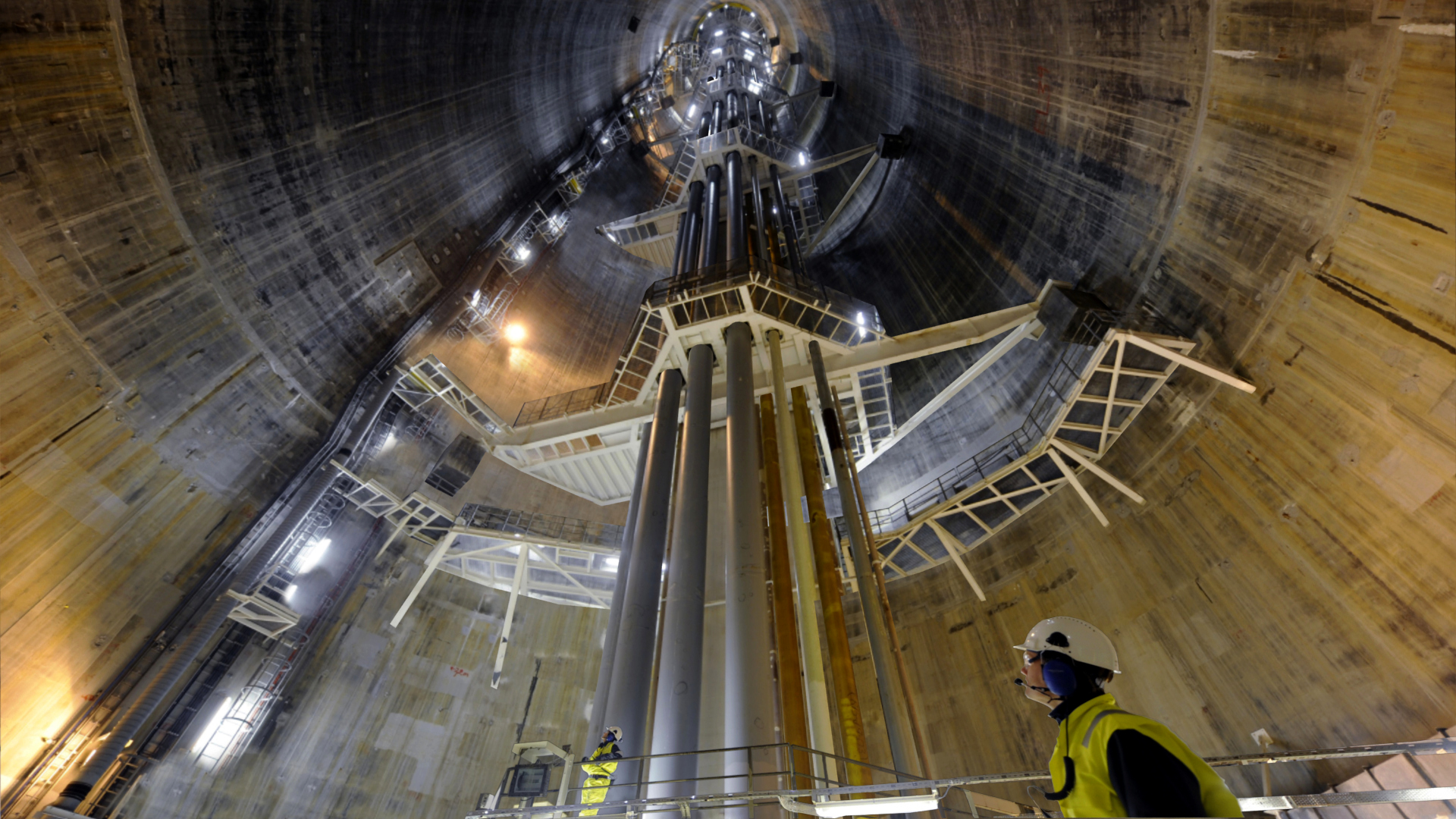 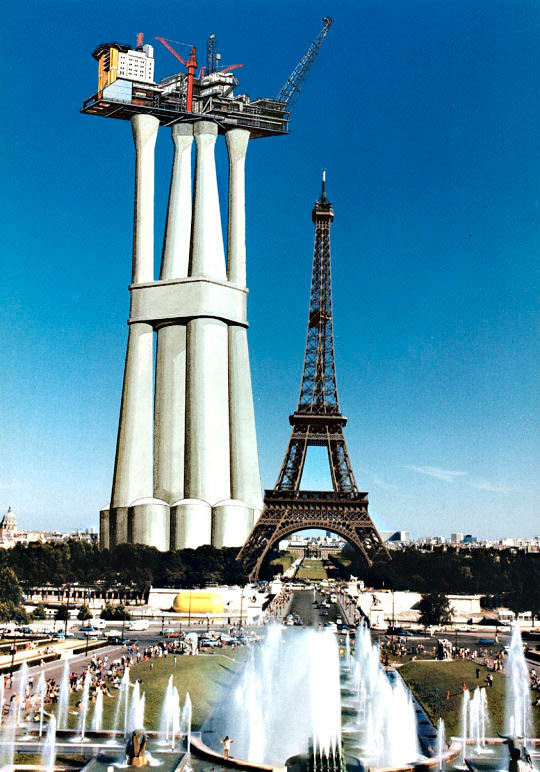 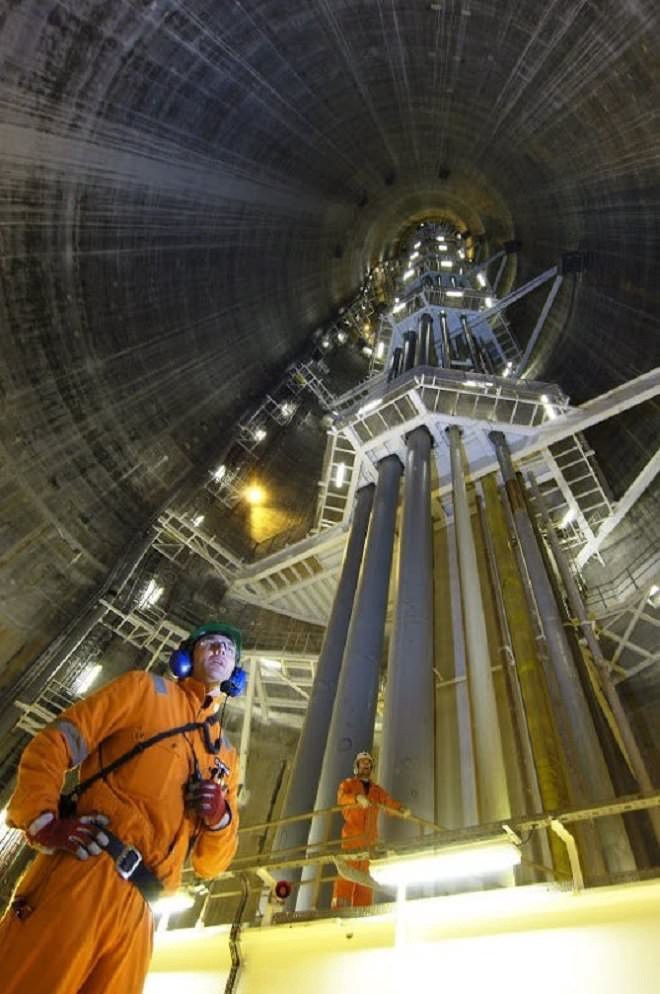 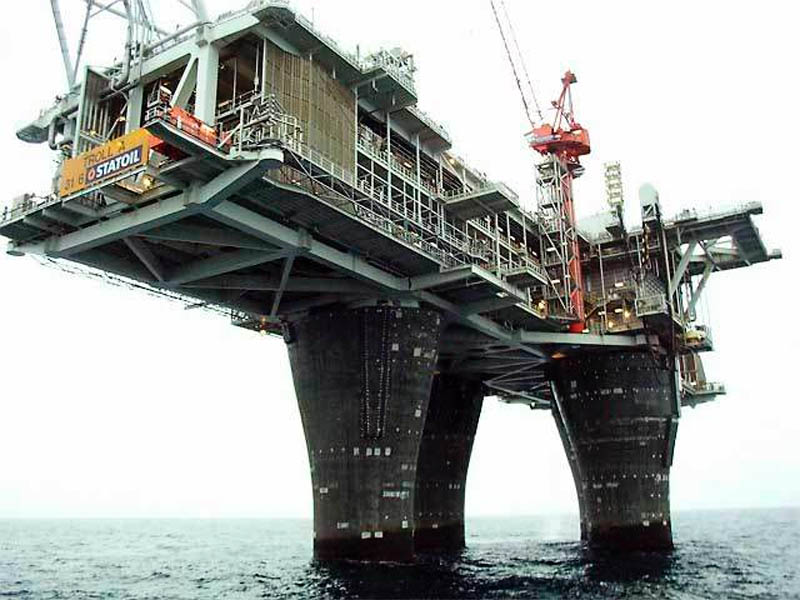 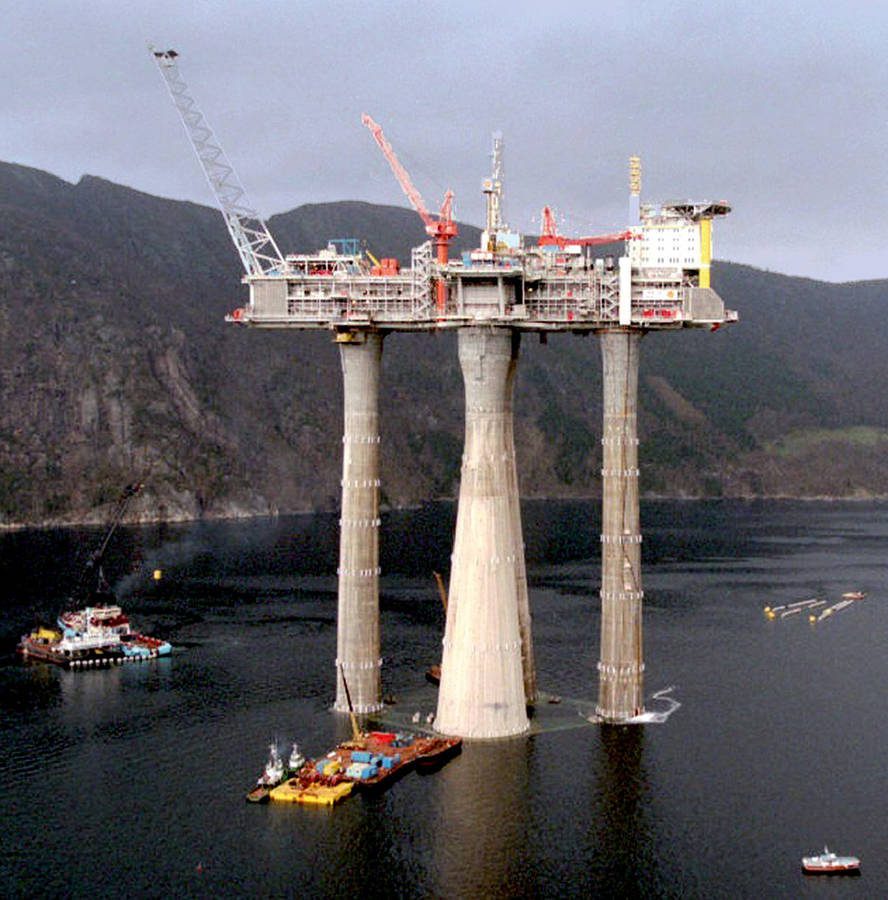