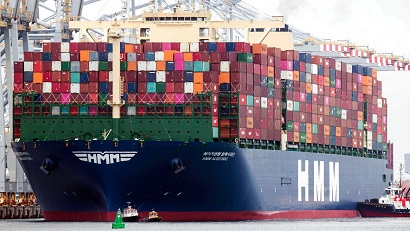 Imagine the Empire State Building laid on its side. The newly christened HMM Algeciras is more than 60 feet longer than the New York City landmark is tall. A walk around the world’s largest container ship would be about half a mile. The world’s largest container ship, the “HMM Algeciras”, called at the port of Hamburg for the first time on Sunday, June 7 and moored at the Burchardkai.

How many container can be loaded?

The freighter can load 23,964 standard containers (TEU), a good 200 TEU more than the “MSC Gülsün” and its sister ships, which until April were able to claim the title of the world’s largest container giant.

During its stay, the mega freighter will load and unload around 8,500 containers or 13,600 TEU.

The HMM Algeciras will leave the port on Wednesday around 2 p.m. “HHLA is pleased that HMM is now coming to Hamburg with its largest ship units,” said board member Jens Hansen. “This confirms us in our investments in new bridge technology and storage capacities in order to be able to handle these ship sizes today.”

The outer dimensions of the container giants – around 400 meters long and 61 meters wide – have not changed for years, but they are carrying more and more containers. The “HMM Algeciras” is the first of twelve sister ships that will be delivered to the shipping company in the coming months and will operate between Asia and Europe.