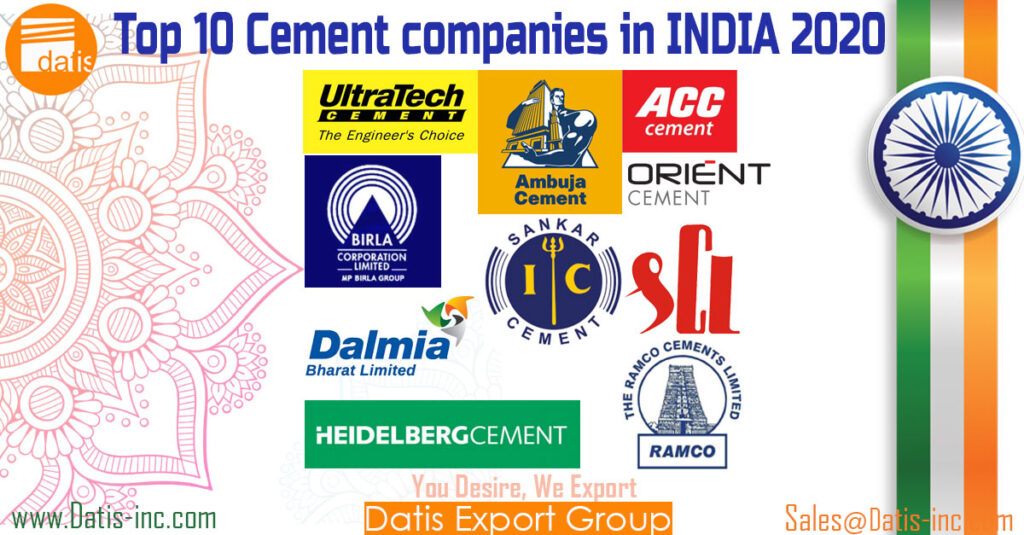 Cement is a very useful binding material in construction. The applications of cement over various fields of construction have made it a very important civil engineering material.

It is used in the construction of important engineering structures such as bridges, culverts, dams, tunnels, lighthouses etc.

Cement is mainly used as a binder in concrete, which is a basic material for all types of construction, including housing, roads, schools, hospitals, dams, and ports, as well as for decorative applications (for patios, floors, staircases, driveways, pool decks) and items like tables, sculptures or bookcases.

The production of cement in India

Started in 1889 by a company based in Kolkata. In the early nineteenth century, the industry started taking an organized stance and is currently, the second-largest producer of cement worldwide after China. The production volume of cement across the South Asian country was about 340 million metric tons in the financial year 2019. The sector encompasses a total of over 450 small and large cement plants.
Supply and demand
Within the country, the maximum demand was created by the housing sector, with a share of over 60 percent during the financial year 2017. The increased demand was a consequence of the government setting up an Affordable Housing Fund under the National Housing Bank, which helped the citizens get credits to buy homes. Outside the nation, Sri Lanka was the leading destination for cement clinker exports in 2016, with over one million metric tons of estimated exports.
Building together
To meet the increasing domestic and international demands, companies started to sign joint ventures.

In 2017, the number of mergers and acquisitions in the cement and building sector amounted to 14 deals. Due to its possibilities in composition in addition to be a binder, cement is a very precious commodity.

The top 10 cement companies in India

India is the second-largest producer of cement in the world. Ever since it was deregulated in 1982, the Indian cement industry has attracted huge investments, both from Indian as well as foreign investors.

The cement industry employs about 20,000 people across downstream sectors for every million tonnes of cement produced.

The real estate, construction, and infrastructure sectors are booming in India. Additionally, the government initiatives on the development of 98 smart cities are expected to provide a major boost to the sector.

Basically, the housing sector is the biggest demand driver of cement. The sector accounts for about 67% of the total consumption in India. The other major consumers of cement include infrastructure at 13%, commercial construction at 11%, and industrial construction at 9%.

is the largest manufacturer of grey cement, Ready Mix Concrete (RMC) and white cement in India. It is also one of the leading cement producers globally. Ultratech is the Largest among the top 5 cement companies in India . Ultra tech is the subsidiary of Grasim Industries which is owned by Aditya Birla Group.

The company has a consolidated capacity of 102.75 Million Tonnes Per Annum (MTPA) of grey cement. UltraTech Cement has 20 integrated plants, 1 clinkerisation plant, 26 grinding units, and 7 bulk terminals. It is the leading cement companies in India.

Its operations span across India, UAE, Bahrain, Bangladesh and Sri Lanka. UltraTech Cement is also India’s largest exporter of cement reaching out to meet the demand in countries around the Indian Ocean and the Middle East.

It employs a diverse workforce comprising of 120,000 employees, belonging to 42 different nationalities across 36 countries. It is the largest producer of cement in India based on turnover and market share.

a part of the global conglomerate LafargeHolcim, is among the Top 10 Cement Companies in India. It is the second-largest producer of cement in India based on turnover.

Ambuja Cement has provided hassle-free, home-building solutions with its uniquely sustainable development projects and environment-friendly practices since it started operations. Ambuja cement is in the list of top 5 cement companies in India.

Currently, Ambuja Cement has a cement capacity of 29.65 million tonnes with five integrated cement manufacturing plants and eight cement grinding units across the country. The company also generated 7.4% of its power needs from renewable resources. The company produces one of the best quality cement in India.

is one of India’s leading manufacturers of cement and ready-mix concrete with 17 cement factories, 75 ready mix concrete plants, over 6,700 employees, a vast distribution network of 50,000+ dealers & retailers and a countrywide spread of sales offices. It is the 3rd leading cement companies in India

ACC has consistently set benchmarks in cement and concrete technology since its inception in 1936. From the Bhakra Nangal Dam in 1960 to the Mumbai-Pune Expressway, ACC cement is at the foundation of iconic landmarks across the country.

In 2005, ACC Limited became a part of the reputed Holcim Group of Switzerland. In 2015 Holcim Limited and Lafarge SA came together in a merger of equals to form LafargeHolcim – the new world leader in the building materials industry.

is the Fourth among the Top 10 Companies in Cement in terms of sales. Incorporated in 1979 by renowned Bangur family based out of Kolkata. Set-up the first Cement Plant in 1985 with an installed capacity of 0.6 Mtpa. Today Total Cement Capacity of the Company is 29.30 Million tons.

Is Fifth Among the Top 10 Companies in Cement by Total Revenue. The Company has a cement manufacturing plant in southern states of Tamil Nadu (Dalmiapuram & Ariyalur) and Andhra Pradesh (Kadapa), with a capacity of 9 million tonnes per annum.

A leader in cement manufacturing since 1939, DCBL is a multi-spectrum Cement player with double-digit market share and a pioneer in super-specialty cement used for Oil wells, Railway sleepers, and Airstrips. It is last in the list of top 5 cement companies in India.

Is the flagship Company of the M.P. Birla Group. Incorporated as Birla Jute Manufacturing Company Limited in 1919, it was Late Mr. Madhav Prasad Birla, who gave shape to it. As Chairman of the Company, he transformed it from a manufacturer of jute goods into a leading multi-product corporation with widespread activities. It is one of the Top leading cement companies in India

Under the Chairmanship of Mrs. Priyamvada Birla, the Company crossed the Rs. 1,300 – crore turnover mark and the name was changed to Birla in 1998. Mr. Harsh V Lodha is now Chairman of the Company. It is sixth in the list of top 10 cement companies in India.

The Company is primarily engaged in the manufacturing of cement as its core business activity. It has a significant presence in the jute goods industry as well. The company produces one of the best quality cement in India.

was founded in the year 1946 by two men, Shri S N N Sankaralinga Iyer and Sri T S Narayanaswami. They had the vision to inspire dreams for an industrial India, the ability to translate those dreams into reality and the ability to build enduring relationships and the future.

From a two plant company having a capacity of just 1.3 million tonnes in 1989, India Cements has robustly grown in the last two decades to a total capacity of 15.5 million tonnes per annum. It is seventh in the list of top 10 cement companies in India.

India Cements has now 8 integrated cement plants in Tamil Nadu, Telangana, Andhra Pradesh, and Rajasthan and two grinding units, one each in Tamil Nadu and Maharashtra.

Is the flagship company of the Ramco Group, a well-known business group of South India. It is headquartered in Chennai. It is eight in the list of top 10 cement companies in India.

The main product of the company is Portland cement, manufactured in eight state-of-the-art production facilities that include Integrated Cement plants and Grinding units with a current total production capacity of 16.45 MTPA. The company is the fifth largest cement producer in the country.

It is the most popular cement brand in South India. The company also produces Ready Mix Concrete and Dry Mortar products and operates one of the largest wind farms in the country.

Established in 1979, Orient Cement was formerly, a part of Orient Paper & Industries. It emerged in the year 2012 and since then, it has emerged as one of the fastest-growing and leading cement manufacturers in India.

Orient Cement began cement production in the year 1982 at Devapur in Adilabad District, Telangana. In 1997, a split-grinding unit was added at Nashirabad in Jalgaon, Maharashtra. It is ninth in the list of top 10 cement companies in India.

Is a subsidiary of HeidelbergCement Group, Germany. The Company has its operations in Central India at Damoh (Madhya Pradesh), Jhansi (Uttar Pradesh), and in Southern India at Ammasandra (Karnataka).

The Company increased its capacity to 5.4 million tonnes p.a. Through Brownfield expansion of its facilities in Central India in 2013. It is 10th in the list of top 10 cement companies in India.

The new manufacturing capacity has enabled the Company to increase its market share in Central India i.e. Madhya Pradesh and Uttar Pradesh and in markets of Bihar, Haryana, and Uttarakhand.

The Future of the India Cement Industry

India’s cement production capacity is expected to reach 550 MT by 2025.

Due to the increasing demand in various sectors such as housing, commercial construction, and industrial construction, the cement industry is expected to reach 550-600 million tonnes per annum (MTPA) by the year 2025.

We hope you find detailed information about the Top 10 cement companies in India 2020 in this article.
Datis Export Group supplies all types of Portland Cement (Grey, and White) and Cement Clinker. Our sales team will manage to export the Cement to any destination port for Bulk and Bagged containerized cargoes.